Connect me with Ashley Lila King 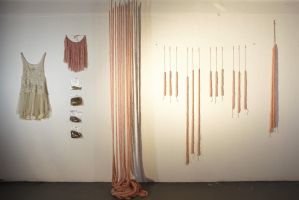 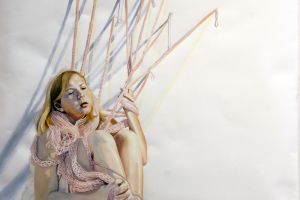 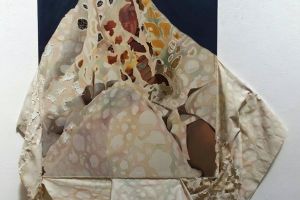 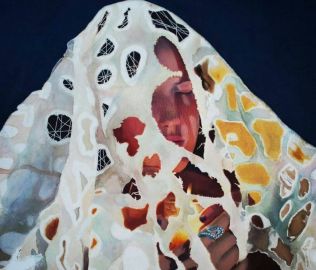 I am interested in labor and the process of repetition as a form of healing of mending. Repetition serves, not only as a mirror of the rumination that comes with trauma, but also as an attempt to reconcile with it, through needle and thread, stitch by stitch, yarn and hand, under and over.

I see the fabric, the yarn, and the thread as an extension of the body, surgery on the body, and the mending of the body. This is my attempt to redefine my body with my hand, rather than that of others, and claim back the agency I let escape me along the way.

King was born and raised in Portland, Oregon. She received her BFA in Painting at the San Francisco Art Institute. King has shown her artwork at institutions and venues such as San Francisco Art Institute, the Pacific Northwest College of Art, Oregon College of Art and Craft, Studio Art Centers International, Florence, Haystack Mountain School of Crafts, Cell Space Gallery, and the Lake Oswego Festival of the Arts. Predominantly a painter, her work utilizes various mediums in order to create a political dialogue around current feminist and human rights issues.

During her studies at SFAI, King tutored for three years at Garfield Elementary School, a Cantonese bilingual school, and worked at pre-college art programs at PNCA and SFAI. While pursuing her degree, King also studied abroad at Studio Art Centers International in Florence, Italy where she volunteered at Gaetana Agnesi, an Italian primary school, teaching English. Upon graduation, she returned to Portland, Oregon where she worked at several educational programs, preschools and primary schools including Manos Unidas Montessori.

King later received her MAT in K-12 Art Education from the Maine College of Art where she worked as a student teacher at Deering High School, Ocean Avenue Elementary School, and Presumpscot Elementary School. King plans to work as a teaching artist at Oregon College of Art and Craft this summer. She is currently seeking a position as a full-time high school or middle school art teacher in Minnesota.